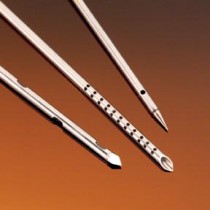 Biopsy Punches, Lancets, and Stylets are used in many of the latest techniques for obtaining an actual sample of tissue from within a part of the body. These techniques can also use a small biopsy needle.

These components require the sharpest points and edges so as to minimize the impact of the sampling procedure on the patient. Our technology enables new device designers to create optimized components such as a biopsy punch, biopsy needle, lancet or stylet that perform better in these demanding applications and uniquely meet your patient needs.

- Used for the removal of dermatological samples for biopsy examinations, the biopsy punch is a handled medical tool with a sharp, round cutting surface. Sometimes compared to a cookie cutter, the biopsy punch has a hollow handle, allowing doctors to look through the handle to see the tissue sample they are removing. Biopsy punches are most commonly found in measurements from approx. 2mm to 8mm.

In addition to a biopsy punch, skin and tissue samples can be taken through a shave biopsy which just removes the affected area of skin or an excise biopsy which removes a large section of tissue to be analyzed. The biopsy punch method is used to remove a larger sample of skin to be tested that is less intrusive and creates a clean cut removing a core sample of skin.

Cadence lowers penetration force for biopsy procedure - A major OEM surgical device company was having problems getting a new version of their biopsy device accepted in the market. It did not become obvious until after the new product launched that the device performance was actually inferior to their prior device. The biopsy device utilizes a custom needle / introducer to penetrate the skin surface and remove a precise amount of suspicious tissue for further lab testing. The mechanical design of the device dictated that the special needle / introducer penetrate the skin surface and underlying tissue with minimum deflection and tissue damage so as to aid in the most accurate positioning for removal of the target tissue sample.

The production of the new biopsy devices had been moved to an off-shore source in search of lower total device cost. The OEM had not realized that the critical components for this device would lack the level of precision sharpness required for the biopsy device to function properly.

Cadence was contacted to evaluate current needles in the IncisionLab™and develop a rework process that would get the devices functioning asap. Using rapid prototyping capability the new production needles were reworked using an alternative cutting edge generation process. The new process consisted of precision grinding the points of the needles on proprietary / custom, CNC sharpening equipment. This new process lowered the actual penetration force by more than 50%!

Results for the OEM device company were amazing! The product was re-launched into the market and was very well accepted. Cadence continues to be the supplier of choice for reworking the off-shore product that fails to perform as needed. All problems associated with the high penetration force and tissue deflection were totally eliminated along with any concern for additional tissue damage.

What are you looking for?